Surrey and The Silver Screen 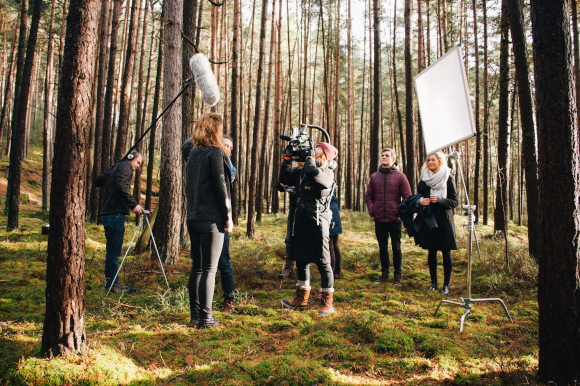 When the word ‘Hollywood’ is tossed into our minds, we are frequently transported to the glitz and glamour of far-away red carpets, Oscars and breath-taking celebrities.

A far-cry from home here in Surrey. However, Hollywood may be a lot closer than you think.

From The Hip Video Production have created a map of the highest-grossing Hollywood films within Surrey and Hampshire.

Some of our favourite films have chosen Surrey to shoot in and with Netflix’s new deal with Shepperton Studios, it looks like more sets will pop-up on our doorstep.

Harry Potter, Hermione Granger and Ron Weasley can all be seen in the sixth instalment Harry Potter & The Half Blood Prince exploring Surrey’s Bourne Wood on numerous occasions.

Inception, starring Leonardo DiCaprio and Joseph Gordon-Levitt, chose to film on location a scene that many would believe was done in a studio. 2000 Hillswood Drive in Chertsey homes an office block, whose foyer became the star of the dream sequence in which Gordon-Levitt manipulates their route into a Penrose staircase in front of Ellen Page. 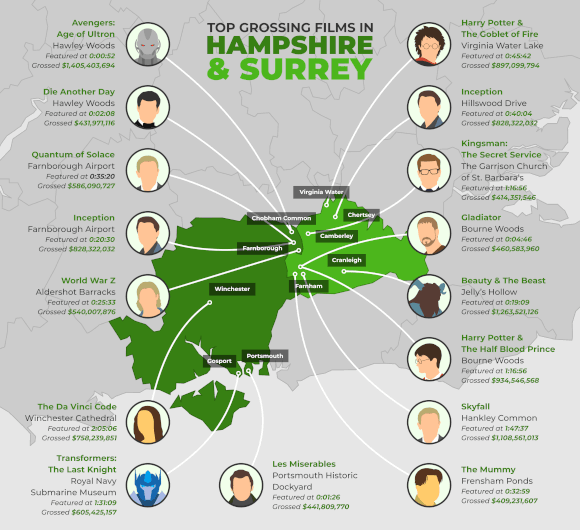 When Brendan Fraser hurls himself from a burning boat in The Mummy along with other cast members, they seek refuge on the banks of The River Nile. Actually, the ‘Nile’ is the banks of Frensham Ponds, clever set dressing makes it almost impossible to spot!

The church in Colin Firth’s final fight scene in Kingsman: The Secret Service is based within a typical Southern American church. This church is none other than The Garrison Church of St Barbara’s. A gem of a chapel hidden in Camberley.

James Bond apparently grew up in Surrey! Well, at least his childhood home was filmed here. The extravagant manor house featured in Skyfall is an elaborate set and was built just for the films. This was placed within Hankley Common to give the look of a grand estate.

One of the most well-known Surrey film locations is Gladiator. Russell Crowe leads the Roman’s into combat in Bourne Wood. These ‘ancient’ woods are a particular favourite with location scouts as their unspoiled land are perfect for period films.

When is comes to family films, we have to mention Beauty & The Beast, the live action film was mostly filmed within a studio but some exterior shots were in Jelly’s Hollow, you can spot this when Emma Watson is being chased by wolves.

These are just the highest grossing films, there are plenty more that have been shot within the county borders, IMDB states over 2500 titles have featured Surrey.

Why not make the most of the diverse locations and take a road trip to see if you can locate where your favourite characters have been?

Alternatively, now the weather is beginning to turn, snuggly the family up with some popcorn and see who can spot these locations first in the film.