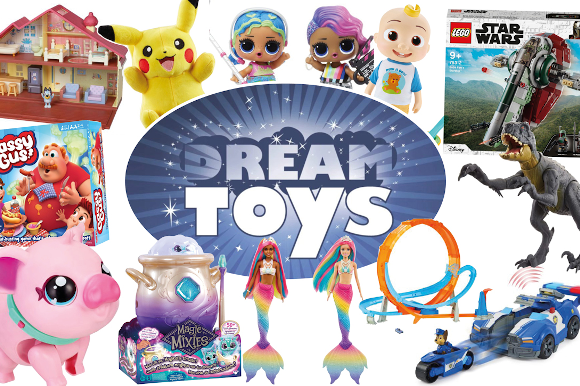 The biggest licences from film and TV are driving the must-have toy wish lists this Christmas – with Star Wars, Pokemon, Jurassic World and Paw Patrol making the Top 12 Toys list, alongside perennial favourites like Barbie, Hot Wheels and L.O.L. The Top 12 Toys list, issued by the Toy Retailers Association, is the most authoritative predictive list of what will be hot this Christmas, selected by an independent panel of retailers and industry experts.

The complete Top 12 list is (in alphabetical order – please note the top 12 is not selected in any particular order). All prices RRP:

This Barbie Dreamtopia Rainbow Magic Mermaid doll features a colour-change transformation that lets imaginations dive into their most colourful fairytales yet. Barbie mermaid doll features a neon-bright fantasy look with a tiara in her rainbow hair, a vibrant multi-coloured tail and a bodice with sea-inspired accents.

Recreate some of the most memorable moments from the show in the Bluey Family Home playset!

Bring CoComelon nursery rhymes to life with the Interactive Deluxe JJ Doll! This adorable 12"doll  is inspired by JJ, a popular character from the educational CoComelon YouTube series!

The gut-busting game, that’s a hoot when you toot! It’s dinner time and Gassy Gus loves to eat. There’s just one BIG problem, most things Gus eats give him gas! Take turns to feed Gus all sorts of food, and watch his belly bulge, but if Gus passes gas on your turn, you have to take extra food cards. Be the first to feed Gus all your food cards to win.

The Hot Wheels® Massive Loop Mayhem™ track set includes a 28-inch wide track loop around which multiple cars race and avoid near misses. One Hot Wheels® vehicle is included, but the challenge lies in how many cars kids can have flying around the track at one time before there’s an awesome crash

Unbox 10 Surprises with LOL Surprise Movie Magic dolls, including movie props, film scenes and 3D glasses! Each doll comes with a cue card and its own unique surprise Movie Scene! Plus, Movie Scenes can be combined with each other.

With over 25 sounds & reactions, Little Live Pets My Pig Piggly makes the cutest pet! She moves and sounds just like a real pig! Feed her with her bottle and give her a cuddle as she reacts to your touch. Piggly is a great little mover; walk her on the lead or watch her ‘bust a move’ on the dancefloor to her own tunes!

So adorable and so interactive, your Magic Mixies Cauldron reacts to you touch and responds to your wand. They love to perform spells with you and may even grant you  a wish as their gem lights up!

Celebrate the 25th Anniversary of Pokémon with this special collection of Pokémon 8 Inch Anniversary Silver Plush! Assortment includes Pikachu, Squirtle, Bulbasaur and Charmander – 4 of the most popular Pokémon ever!

The Mandalorian fans can play out bounty-hunting missions and battles with this brilliant LEGO® brick version of Star Wars Boba Fett’s Starship. This premium-quality set also includes Boba Fett and The Mandalorian LEGO minifigures with weapons, plus a Carbonite brick that fits in a compartment of the starship.