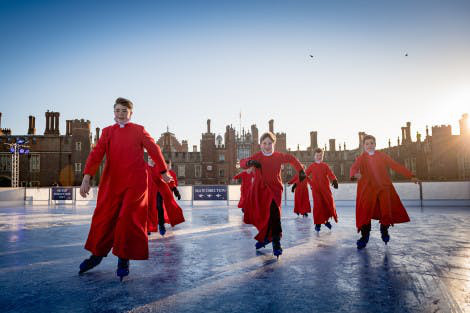 This year, visitors to Hampton Court Palace are invited to join Queen Elizabeth I while she resides at her favourite yuletide residence. The festivities begin in Henry VIII’s Kitchens, where from 21 December until 5 January a team of historic cooks will be recreating some of the delectable treats served up for the court of Queen Elizabeth I, including traditional festive favourites such as roast beef, shred pie - the forerunner of the better known mince pie, containing meat instead of the currant mix we know today - and spiced marchpane. The bustling kitchen complex was created to produce elaborate banquets for Henry VIII and continued to whip up lavish dishes for his daughter Elizabeth I to serve to her guests and staff. At Christmas time during her reign these historic kitchens would have been a hub of activity, providing for hundreds of people at a time. This winter, visitors will be able to walk in their footsteps and find out how the most eagerly anticipated dinner plate of the year has changed over the centuries, while taking in the sights and smells of a working Tudor Kitchen. As they explore the palace, they’ll also be greeted by a host of familiar faces from Elizabeth I’s Court, with the invitation to bring in the season the Tudor way!

On selected Sundays in November and December, visitors can also immerse themselves in the festivities by trying out some of their very own Christmas crafting. This will include making wreaths using greenery from Hampton Court Palace’s famous gardens - ensuring visitors’ front doors are appropriately dressed for yuletide festivities - and perfumed pomander pouches, a traditional gift said to have been carried by Elizabeth I to keep her smelling rosy.  For the Christmas tree, craft sessions will also include lace bauble making, and unique wooden tree charms.

For more tempting treats, head to the Hampton Court Palace Festive Fayre, which runs from 6 -8 December and gives visitors the opportunity to experience the famous courtyards and East Front Gardens busy with Christmas cheer and joyous song from the Courtyard Bandstand.  This year, the Festive Fayre will feature over 120 stalls selling a range of street food and delicious treats such as luxury hot chocolate and gooey brownies, and with the return of The Humble Country Courtyard featuring a hand-selected collection of inspiring gifts and treasures, no one will be stuck for gift ideas! As well as an array of artisan producers and gifts, visitors can be inspired by a star-studded line up of chefs, including Michel Roux Jr and Alex Hollywood. These experts will be sharing their best tips and tricks in The Lexus Kitchen, and with all the demonstration sessions also included in the ticket price, visitors should leave brimming with ideas for their own culinary creations.

This winter also sees the return of Hampton Court Palace’s popular ice rink (22 November – 5 January, excluding Christmas day), with extended opening hours to allow for even more ice-skating fun! Experts and novices alike are encouraged to take to the ice at night when the palace’s Tudor façade is illuminated providing a magical experience for all ages. This year, the ice rink will even be hosting skating parties, with children’s birthday parties including food and drink, and adult party bookings including party drinks and an exclusive VIP area. For post-skating refreshments, or for much needed hot drinks to warm up cold hands, the Ice Rink Café Bar will be open for tempting treats.