Top tips for flying with children 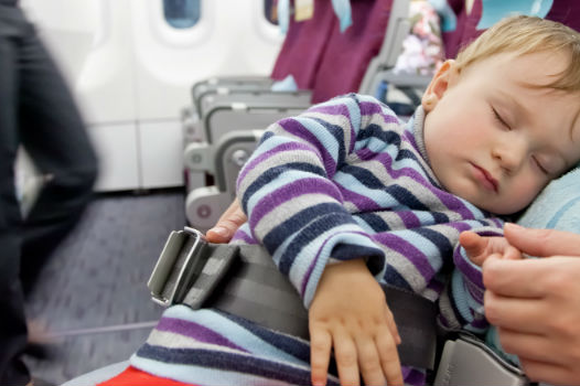 Some people enjoy flying, while to others it’s simply a means-to-an-end part of the holiday experience. Us parents know, however, that flying with children in tow is a whole different challenge.

Keeping young minds happy and occupied for the duration of the flight isn’t always easy. So, to help give you some ideas, we’ve got in touch with the travel experts over at Thomas Cook. Here, they tell us their top tips for flying with children.

Okay, so you can’t entirely guarantee how your kids will behave and what they’ll demand of you once you’re onboard -  but you can take a pretty good guess. The key to a successful and peaceful flight is plenty of prior planning. If they’re likely to complain they’re hungry during the duration of the flight, but are picky and may not like any of the on-board options, pack some of their favourite snacks. If they get bored of toys and games quickly, plan a few different activities to keep them occupied and store these in your hand luggage.  But, at the same time…

Sure, if you pack half your children’s toy cupboard into your hand luggage they’re unlikely to get bored. But that doesn’t leave much room for your things, not to mention the extra weight you’ll have to lug around the airport on both sides.

Give them a bag of their own

One clever idea is to pack each of your child a bag of their own. A light backpack they can carry themselves, that’s full of cheap and easy favourites like crayons & colouring books, handheld puzzles, Lego sets and small bags of sweets. Lots of kids will love the sense of independence they get from having their own luggage, stuffed full of things they enjoy.

Don’t tell them the full truth about the flight time

‘Are we there yet?’ is sure to crop up sooner rather than later. If it does, only two hours into your 10-hour Caribbean flight, it’s easy to panic. The trick is to be honest with them about the remaining time, but not too honest. Several hours can seem like an age to kids, so never tell them they exact time until landing. Instead, use replies like “It’s still a bit to go yet!”, and “Just a little bit further!”. It never hurts to tell them you’re “halfway there!” a little prematurely, either. This should stop them dwelling on the flight time too much and getting agitated.

When you think about it, hopping on board an aircraft and navigating the planet from thousands of feet in the air is pretty incredible. For young minds in particular, this can be a real experience. By making the journey an exciting one, you reduce the likelihood of tears and tantrums. See if you can catch a glimpse of your plane as it comes in, through the departure lounge window. Ask your children to guess which plane they’ll be getting on, and once you’re on board point out the wings and engines. When you’re up in the air, make sure they have a good look out the window and chat about what you can see down below!

Prepare for those popped ears

Nobody likes that pressurised-ear feeling at take-off and landing, but for kids in particular, this can be really distressing. The best way to combat this is by bringing along some sweets or lollipops to suck on, as this motion can help the ears pop and alleviate the pressure. You could also use this as an opportunity for a bit of fun – pretending to ‘be a fish’ and making popping sounds with your mouths is an effective way of making the ears pop.